I was in Tim Hortons the other day–a claim that pretty much all Canadians can make on any given day–and I heard something that had never occurred to me before.  The cashier said to the next guy in line, “I can help you over here.”  And the guy replied, “No thanks.  I don’t need any help.  I just need a coffee.”

Why had I never thought of that response?  It’s genius.

And it has made me worry about what I will say when I go in to work tomorrow.  I always ask the bookstore clientele if they need help.  Upon reflection, it sounds like I am accusing them of requiring psychoanalysis–and that I am offering to provide it.

So far, no one has called me out on the ridiculousness of my offer of help, but it is only a matter of time until that Tim Horton’s guy comes in to the store.  Unless he’s illiterate.  I can only hope. 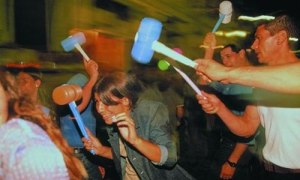 Talk about dumber than a bag of rubber hammers.

1) Perhaps, some of the bookstore clientele are in need of therapy and my offer of help will inspire them to seek medical attention.  Especially the one who smells like pee.

And the world is full of the insane.  Just look at these hammer-wielding morons.  I’m sure that if you saw them walking down the street (with their rubber mallets concealed, of course), they would appear as normal as you or I.  Well, maybe you.  I rarely appear normal.  But, once they bring out their squeaky hammer, they turn in to madmen and madwomen.

This is the Sao Joao Festival in Porto, Portugal–a celebration in honour of St. John, the patron saint of lovers.  Apparently, hitting a member of the opposite sex on the head is meant to be a turn-on.  In the old days, the head-basher of choice was a leek.  Don’t ask me why.  If someone said they were going to take a “leek” on my head, I’d run the other way screaming.  No one knows why the leek was dropped in favour of squeaky hammers–likely due to an influx of head injuries.  Plus, a night of having giant onions whipped across your head would make your hair smell appalling.  No amount of “Gee Your Hair Smells Terrific” (remember that shampoo?) would set it right.

Talk about getting up on the wrong side of the bed.

2) After a rough night of being in hit in the head with a hammer, there is nothing better than a good night’s sleep.  Unless, of course, you find yourself next to a complete surprise.  And I don’t mean the guy you picked up after one too many Molson Canadians–the one who looked like George Clooney in the pale light of the moon, but more closely resembled Woody Allen in the light of day.  Don’t get me wrong.  I am a huge fan of Woody Allen, but you couldn’t pay me enough to sleep with him

If you have someone who has recently given up coffee and needs a tad bit of a “jolt” in the morning, you can get yours at http://www.kropserkel.com/horse_head_pillow.htm

And, just in case you live under a rock and have never witnessed the scene that birthed this idea, here you are…

I bet that guy is going to need therapy. 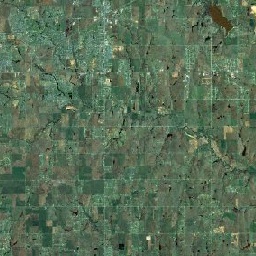 3)  Some people require therapy for issues relating to self-esteem.  I don’t think anything could be harder on one’s self-esteem than being called “spastic” or “spas” for short.  But what else would you call someone who hails from the town of Spasticville, Kansas?

In fact, this name is such a burden on residents that in 2010, they applied to have the town’s name changed to “Trail’s End.”  It is said that the name Spasticville originated with a large home for the mentally challenged that was once located there.  That’s just mean.

In the interim, the inhabitants of this minuscule Kansas town can say it loud, and say it proud.  “I am a Spas.”

“I’m not afraid of death; I just don’t want to be there when it happens.”  Woody Allen.

One of my friends has a t-shirt that says “I see stupid people.”  This is brilliant.  And, unfortunately, quite true.  Needless to say, I encountered one of these “stupid” people in the grocery store.  I should have known that this woman was not rocket scientist material when I saw her hovering over the expired mayonnaise in a clearance cart.  Expired mayo is the last thing this girl would ever eat…my mama didn’t raise no dummies.

Apparently, I am not alone in these thoughts as another bystander openly expressed her disgust over the toxicity of ancient egg products.  She told the mental midget that there was no way she would buy expired mayo, no matter what price it was.  The “stupid person” then said that she doesn’t worry about stuff like that at all.  In fact, her mayonnaise at home is well past its “best before” date and it’s fine.  And then she said something that got the other shopper and I retching and gagging in unison.  Her exact words were “I don’t even keep my mayo in the fridge.”  To which my cohort and I said, “you mean before you open it, right?”  And stupid woman replied, “No, I never keep my mayo in the fridge.”

This is why I hate potluck dinners.  I do not want to eat a dish prepared by a stupid person. 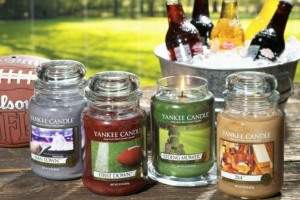 1) With Father’s Day coming up, I thought that this strange new product line was apropos.  The familiar Yankee Candle company has introduced the MAN CANDLE–yes, candles for men.  Why should candle-loving males be forced to endure feminine scents like lilac blossoms, butter cream, or lemon lavender?  While I, personally, have never heard any men complaining about the rampant sexism in the candle industry, obviously someone somewhere was feeling neglected.

Well, no need to worry now.  Yankee Candle has you covered with masculine fragrances like: 2X4 (does this smell like Home Depot?), First Down, Man Town, and my personal favourite, Riding Mower (which is supposed to smell like a freshly mowed lawn).

And if you think that’s impressive, I discovered another butch candle retailer called “Mandle Company” that carries a truly unique line of scented waxes–Stogie, Camp Breakfast, Campfire smoke, Kegger, and Pizzeria–just to name a few. 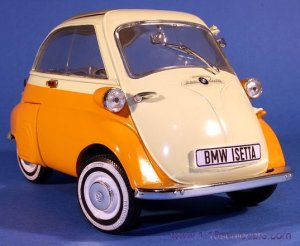 2)  If your dream car involves largeness or luxury, this probably isn’t for you.  I met this automotive oddity on an episode of Storage Wars.  On this particular episode, the ever-creative (and, in my opinion, yummy piece of eye candy), Barry Weiss, recruited a little person equipped with a pair of stilts and night vision goggles.  The now 7′ tall dwarf spotted a round piece of glass in the back of a unit and jumped for joy (carefully due to the stilts and all) and announced that it was likely a huge aquarium.

Barry, always willing to take a gamble, was the high bidder.  Needless to say, it wasn’t a large aquarium–but a small aquarium-like car.  In a storage locker.  Behind a pile of boxes.  And a mattress.

Welcome to the BMW Isetta–a 1950s “bubble” car.  Yes, it is not your imagination.  The only way in and out is through the nose–yup, a great safety feature, particularly after a front-end collision.  But no need to worry.  BMW has you covered.  If you should find your  exit blocked by a wayward vehicle of normal proportions, you should simply crawl out through the sun-roof.  I’m too short for this.  It’s likely that I could barely reach the top of the car, let alone pull myself out of it.

But I am not worried.  For one thing, I do not want a car that is shaped like a football–and is approximately the same size.   Furthermore, as I gaze at this feat of automotive genius, I realize that getting out after a head-on collision isn’t really a major concern.  You’d probably be dead anyway.  Even if said collision was with a wayward Junebug. 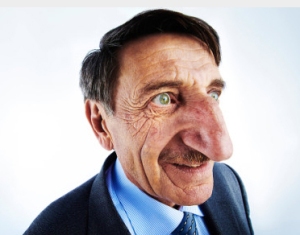 3)  Notice anything “outstanding” about the man in this photo?  Does anything “jump” out at you?

According to the people at the Guinness World Records, he is the proud owner of the largest nose on the planet.  That’s nothing to sneeze at.

Mehmet Ozyurek of Turkey has a honking huge proboscis–measuring in at 3.46 inches from the bridge to the tip.  Isn’t he the nosy one?

And one last pun…now you “nose” more than you did before.  I’ll have to beg your forgiveness for that one.