“If one synchronised swimmer drowns, do all the rest have to drown too?”  Steven Wright.

What does it mean when you hear a voice in your head and this voice sounds like Homer Simpson screaming?  Don’t get me wrong.  I don’t usually hear voices.  It’s just that lately, whenever I step outside, I hear this piercing screech, much like the noise that the Simpson clan’s father figure made when he fell off the cliff.  And then out of the ambulance and off the cliff again.

I am comforted by the fact that my husband hears this voice too.  We both can’t be nuts.  Or can we?  They say that women who hang around together experience the synchronization of their menstrual cycles.  Maybe this is like that, but without the bloating and cramps.  Maybe my husband and I have concurrent periods of insanity.

This unsettling thought spurred us forward to seek out the source of this bizarre noise.  We soon realized that it seemed to be coming from the sky.  And it was not the sound of angels.  The noise seemed to pass over us intermittently.  Strange.

And then, we spotted it.  The source of our confusion.  We would not have to look in to the acquisition of a padded cell or his & her straight jackets, after all.

It was an everyday crow with a really strange caw.  Poor fellow.  What a horrible voice for a crow to be afflicted with.  I’m sure the other crows make fun of him.

Today, June 15th, is officially Lobster Day.  I had no idea that lobsters had their own day.  I guess it seems only fair.  We do dunk them into boiling hot water and listen to them scream.

In honour of this tasty crustacean, I think we should learn a few lobster facts.  So, here we go:

Lobsters taste with their feet.  So, this means their food all tastes like their feet.  Sorry, my feet may smell like parmesan, but they sure as heck don’t taste like it.  They taste like foot.  Or so I have concluded.  I haven’t actually tasted my feet.  And I don’t eat floor food–five second rule or not.  Floor food has been where my feet have been.

A lobster’s brain is in its throat.  That must be very uncomfortable.  Wouldn’t you experience a constant a-hem?  Would a hiccup cause a stroke?

Lobsters breathe through gills on their legs.  I’m glad my nose isn’t on my legs.  Too close to my farts.

You are already aware of my fascination for ordinary things made big, so it only makes sense that I feature a giant crustacean.  The photo above is Larry The Lobster, a 17 metre tall tourist attraction made of steel and fibreglass.   He stands proudly in Kingston SE, South Australia.

We are used to the traditional red lobster.  Heck, they even named a restaurant chain after them.  But in the cold waters that extend from England to Morocco, you can find the blue lobster.  This Smurfy lobster’s bright colouring makes him vulnerable to predators.  Plus, he is supposed to be even yummier than his North American counterparts, so humans are willing to pay big bucks to chew on his claws.  I would still never eat at a place called Blue Lobster.  A little too Green Eggs and Ham.

Okay.  This just goes to show that there are some people that have more money than brains.  Meet the “Zillion Dollar Omelette”–10 oz. of American Sturgeon Caviar, an entire lobster, a whole lot of egg, chives, cream, and more.  All this for a “mere” $1000. US.  Only available at Norma’s in Le Parker Meridien Hotel, Manhattan.

How am I ever going to face my boring PB on toast breaky tomorrow morning?  So pedestrian.

Apparently, about 12 people order this each year.  If you want to have a less expensive (and less decadent) version, you can have a scaled down, 1 oz of caviar omelette for $100.

And if a little lobster doesn’t have enough to worry about–being eaten by other sea creatures, being boiled in a pot, or winding up in a rich person’s omelette–they have incredibly horrible mating rituals.  They pee in each other’s faces–apparently, this is a turn-on.  It also allows the male to know that he has, indeed, found himself a female lobster.  If he is in the mood, he’ll flip her over and they’ll assume the missionary position.  Seriously.  But, if she isn’t in the mood–perhaps she has a headache (Would this be in the throat, where her brain is?  Or is it because he just pee’d on her head)–she will not allow herself to be flipped.  And the male will have to gulp down some liquid and pee on someone else’s head. 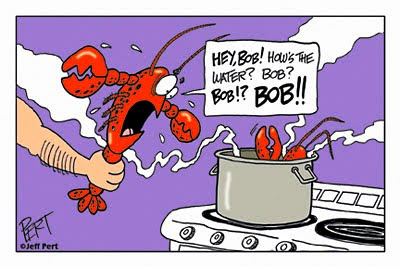 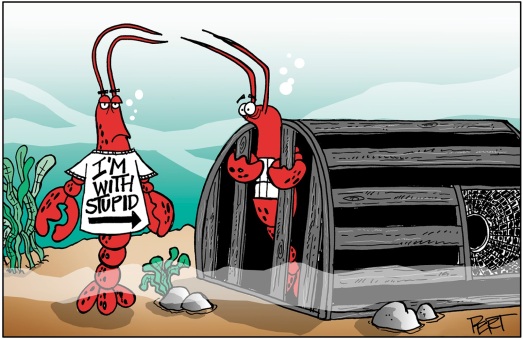