Genetics is a crapshoot.  Some people hit the DNA jackpot–Angelina Jolie and Brad Pitt, for example–and others don’t fare so well.  I would be one of these people.  I rolled the dice and this is what I got:

I realize that I have just portrayed myself as a pasty, round, dwarf with a balding head and claws for feet.  This is not true.  I also have very thin lips.  No really, I’m not that bad.  I’m no Jennifer Aniston, but I’m not Godzilla either.  I think we all have things we’d change about ourselves, if we could.  First of all, I’d love to be about four inches taller.  I have thought of hanging by my feet in the hopes of stretching myself.  I’ve never seen a short bat.  This stretching thing would also make me much skinnier.  Think Stretch Armstrong.

I really do believe in the old adage, “Never judge a book by its cover.”  Unless you come across a cover like this. 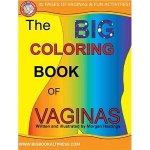 1)  This is just weird.  Someone actually thought that children all over the world would want to colour female genitalia.  What’s worse is that a publishing company also thought this would be a great idea.  And that someone out there has probably paid hard-earned money to buy it.

This raises another question.  Aren’t colouring books supposed to be colourful.  Last time I looked, my parts were monochromatic.

I had to check out a few sample pages at Amazon.com.  Curiosity got the best of me.  Well, here is what I found:

If you think your children would benefit from this colouring book, they have places for people like you.  Oops.  Must really learn to censor myself better.  As I was saying, if you would like to order this “educational” book for your child, you can get it here:  http://www.amazon.com/The-Big-Coloring-Book-Vaginas/dp/B000R0HU92.

I’m sure there will still be several in stock.  Bet these would make a splendid stocking stuffer.

2)  Sometimes, our appearance is not hampered by any genetic flaws, but by the choices that we make.  Anyone who watches Coronation Street will be familiar with Deirdre Barlowe and her horrific eyewear choices.  If you are unfamiliar, these will illustrate my point.  Lenses the size of garage doors.  I hope they at least help her see better.

3)  Extra fingers run in my family.  Unfortunately, I was born with the usual 10 fingers.  This is one defect that I would love to have inherited.  Imagine having an extra finger.  Think of how fast I could type.  This blog would have been finished ages ago.  And you would have finished reading it a long time ago.  Ah, now you wish I had that sixth finger too, don’t you?

This condition is called Polydactyly and is usually found in people, dogs, and cats.  It is most commonly located by the little finger, but can also develop beside the thumb.  According to some sources, it occurs in 1 of every 500 live births.  Hm.

Admittedly, my family’s sixth finger tends to be a useless, limp flap that just hangs there.  But I still think it would have been cool.  A great conversation starter at parties.

But it would have been hard to find gloves.