“I wonder if other dogs think poodles are members of a weird religious cult.”  Rita Rudner.

Apparently, when I was in kindergarten, I came home crying to my mother that a boy at school had pushed me down and stepped on my throat.  Seriously, stepped on my throat?  Sadistic little bugger.  My husband would say that this likely happened because I talk too much (and, to his dismay, this early assault on my larynx did little to inhibit my propensity for chatter).

My mother, of course, calmed me down and said something motherly like “he probably just has a crush on you.”  Yes, crushing a little girl’s esophagus is the pre-preschooler’s equivalent of red roses and chocolates.  But, I did notice that my mother’s face was making strange contortions as she made this declaration–turns out that she thought my horrific experience was incredibly funny.   One of the benefits of having offspring, so it seems, is the hours of comedic relief they provide.

1)  Humans are fascinated by regular, everyday objects made big.  It’s a strange phenomenon really.  If you build it, they will come–no matter what “it” is.

It reminds me of the episode of Corner Gas, when Hank proposes that Dog River build something really big to attract tourists.  Well, the mayor’s aunt suggests a large “hoe,” which then leads to a “dirty hoe,” and if it’s not made right it could become a “crack hoe.”  And it digressed from there.

You can view a clip here: 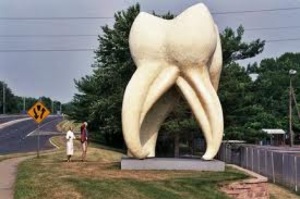 Turns out that someone thought it would be a great idea to build a giant molar and plunk it down on the side of the road.

And, just in case no one flocks out to see this giant dental masterpiece, they decided to build an audience too.  No, those are not real people enthralled with the gargantuan tooth.  They are statues.  I kid you not. 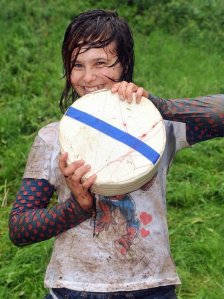 2)  Not only will humans travel great distances to see boring things made big, but we also love to partake in extremely dumb contests.  I have introduced you to fish flinging, wife hauling, and even a tug-of-war competition that cost some people their arms.  Now, we turn our eyes to the U.K, where people risk life and limb for a big wheel of cheese.

Cooper’s Hill in Gloucestershire provides the perfect setting for this annual event that is believed to have been going on for roughly 200 years.  The hill is actually a very steep incline–more cliff-like, really–and the muddier it is, the better.  Someone rolls a wheel of cheese down the sharp drop and people chase after it.  The first one to the bottom receives the prize–which in my case, would be a whole lot of constipation.

Yes, people get very muddy.  Some even wear white suits to highlight the grime.  But many have actually been carted off on stretchers with broken bones and concussions.  In fact, 2005’s events proved extra bloody.  A forced “intermission” took place, while the racers waited for all of the ambulances to return from the hospital, where they had taken the wounded from earlier races.

Yes, people are weird.  You can take a gander at some cheese-loving maniacs here: 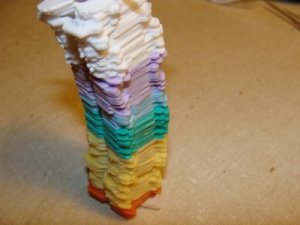 3)  Now that I’ve made you sit through some useless information, here is a bit of trivia that someone might actually be able to use.  I have to thank my friend, Stephanie, for providing me with this jewel.

There are things in life that we just accept as being the way they are without ever questioning why.  Bread tabs come in different colours.  It never really occurred to me to wonder why…until now.

It turns out that the colours actually mean something.  They tell us on which day of the week our bread was baked.  Here’s how it works:

(Note that the colours are in alphabetical order to make it easier to remember.  Sometimes, we humans are clever.)

So, if it’s Saturday, ideally you want a yellow tag.  Definitely not blue–or the tag might not be the only thing that’s blue.

And, this fact has been verified by everybody’s favourite myth-testing site–Snopes.