There is something that has disturbed me for years and I can no longer be silent.  Why do so many articles of clothing wind up in the middle of the road?  Seriously.  In the last week, I have encountered what looked like a pink skirt, a brown glove (especially strange in JULY), a sock, and several lone shoes.

Why do people feel the need to peel off their clothing and throw it into the street?  Okay, if I was wearing brown gloves in thirty degrees Celsius, I would shed the gloves too.  But why would I be wearing them in the first place?  And why was there only one glove?  Perhaps, it belonged to a one-armed man that gets really cold in the morning.  Maybe he also had only one foot, which would explain the whole one shoe thing.  But why so many single shoes spread out over such a large area at different times?  Do one-footed people make up a larger part of the population than I thought?  And why do they keep losing their shoes?

The skirt had me really puzzled.  To me it indicated that someone had been driving down that very street naked.  Which leads me to wonder if nudists drive nude?  Or would they stick to the pleather?

If you have ever felt the urge to rip off your clothes and throw them out your car window, I want to hear from you.  I want you to make me understand what compels a sane person (assuming that you fit this category) to abandon one shoe or glove on the yellow line.  Are people driving so fast that their clothes simply fall off?  Inquiring minds want to know.

1)  This made me sad.  The world’s largest shoe tree (not the kind you use to stretch your shoes, but a tree that many people have–for some reason–hung their footwear from) once proudly stood 125 miles east of Reno, Nevada.  This cottonwood tree had reason to be proud.  It had become a quirky destination for lovers of oddball roadside attractions.

And, then, some disturbed individual(s)–perhaps, envious of its many shoes–chopped the tree down.  According to authorities, a fresh pool of sawdust was found at the scene next to the victim.

This story made me feel sad for several reasons.  First of all the cottonwood didn’t ask to become a “Shoe Tree.”  It’s fame–like the shoes–was foisted upon it.  Second, it was a cool piece of Americana.  And, third–loads of people sacrificed their Nikes to make this piece of art–only to have it cut down in its prime.  Worst of all, it just goes to show that someone always has to spoil the fun for everyone else.

I hope the perpetrator(s) suffer corns and bunions for the rest of their days. 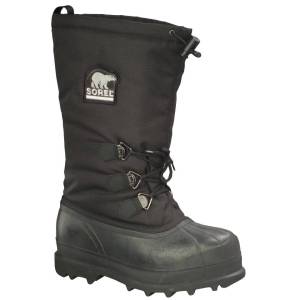 2)  In Canada, we have a winter boot company called Sorel.  And one of Sorel’s models is called the Glacier and is designed for weather as cold as minus 100.  Seriously.  (Unlike the stereotypes, we do not experience anywhere near -100 anywhere other than the North Pole.  While no country actually can lay claim to the “physical North Pole,” the “magnetic” North Pole is in Canada.  Does this mean Santa Claus is Canadian?” )

Anyway, these honkin’ massive boots are available in a men’s size 17.  Yup–size seven PLUS ten.  Those are big feet–even by North American standards.  I have always wondered what the overseas manufacturers think when they make a behemoth pair of boots. “Holy Crap!  Canadians are giants.”

According to the American Academy of Orthopaedic Surgeons, the average shoe size for an American man is 10.5, while the female average is 9.  Meanwhile, according to a website that specializes in helping Westerners who live and work in China, many have had difficulty finding footwear larger than a man’s size 9 or a woman’s size 7.5.  It seems we are a gigantic race.

Enormous puffy black winter boots in a whopping size SEVENTEEN would, without a doubt, cause quite a stir in downtown Beijing.  Heck, I would be fascinated by them and my husband has size 13s.

3)  I wonder what it’s like to have a last name like Boot.  Or Foot.  Especially with the first name Harry.  I imagine Harry Foot would look like the guy pictured here.

Now, back to the whole abandoned clothing in the road thing.  If I owned these articles of clothing, I would not only throw them out my car window, I would drive over them several times. 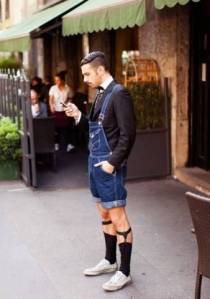 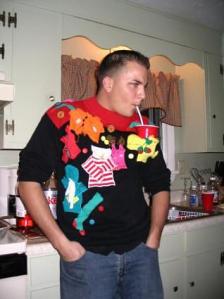