Summer is the perfect time for trying to eat healthier.  Lots of weird fruits to try.  Walmart had a mound of Dragon Fruits the other day–can’t wait to try mine.  Hope they’re an actual fruit and  not something that has been food growing next to a Japanese Nuclear Power Plant.  The price of produce this time of year is a lot easier on the wallet too.  I no longer have to re-mortgage my house to buy a beefsteak tomato, a bundle of asparagus, and some blueberries.  (I live in Canada.  The only thing we can grow in the winter is snow).

But there is a downside to consuming large quantities of fruits and vegetables.  For one thing, broccoli and cabbage stink when they’re boiled.  Forget grenades and machine guns.  Just wave a pot of cabbage water at the enemy and they will flee in terror for sure.  My house perpetually smells like a fart.  (Admittedly, not all of that can be blamed on the cabbage water).  Cruciferous veggies produce noxious gases, it seems, that must escape the body.  Noisily.  And with lethal consequences.  (Note to self: Adopt elderly dog to serve as scapegoat.  Or maybe an actual goat?  To scape?)  (Another note to self: google how term “scapegoat” came about.  Did it involve a goat?)

And, to make matters worse, this “healthy eating” is affecting my pee.  Holy crap!  Asparagus urine reeks.  The only thing worse than peeing out a river of asparagus juice at home is having to do it in a public washroom.  I swear the lady beside me must think I have something seriously wrong with my plumbing.  It’s all I can do  not to scream out, “It’s the asparagus’s fault.”  But, knowing me, I couldn’t just stop there.  I’d wind up in a through-the-stall rant about what this healthy eating is doing to my home and my innards–not to mention my social life–and that my husband has recently developed a hankering for beets and that, next, I’ll have to deal with beet-coloured pee staining the toilet bowl.

Rather than risk this, I simply let them think that my urinary tract is rotting.

1)  TV shows and movies often portray displeased audiences as violent, produce-hurling delinquents who, for some reason, always have a  tomato or two on hand for tossing.  I would never throw a tomato at someone–even if they were assaulting my ears with jazz fusion.  (Apologies to jazz fusion fans.  It is just not my cup-of-tea.  Nor is Country.  Great, now I have to apologize to the Country fans.  Note to self: shut up before you alienate your entire blog audience.)

If you are going to hit someone with something from  the produce section, at least a tomato is soft.  It is one of the edible orbs that most closely mimics the Nerf ball.  An orange does not.  An orange would hurt.  A lot.

So, naturally, humans have created a Carnival that revolves around exactly that–pelting other humans with non-Nerf-like balls.  ORANGES.

In the Northern Italian city of Ivrea, citizens and tourists alike come out to mark this festival with a very strange origin.  Apparently in the 12th or 13th century (the story varies from one source to another), a tyrant from a powerful family attempted to rape a young commoner on her wedding night.  He was unsuccessful as she decapitated him.  Not with an orange, by the way.

If you wish to participate in this tradition, seek help.  Sorry.  Those things just keep popping out of my head and down to my fingers.  Seriously, if you wish to play, you must join a team.  Tourists are warned to wear a red hat, which apparently serves as a “leave me out of it” symbol.  Heaven help anyone who isn’t made aware of this fact.  I, personally, would opt for a red goalie mask–but I’m Canadian.  Rumour has it that we never leave home without one.

2)  I love berries, but I hate the fact that they often come with their own wardrobes–fur coats.  Well, I may have stumbled upon a cure.

Using 1 part vinegar (white or cider work best) and 10 parts water, submerge berries and give them a good wash.  Apparently, vinegar is an enemy to mould spores and inhibits their growth.

Your little berries will remain “coatless” for much longer, giving you more time to scarf’em down.  YAY!

3)  It’s not every day you see a man with pasty white legs and black sport socks–and, oh ya–dressed up as a banana.  It’s even rarer that you see one running a marathon.  That’s exactly what Patrick Wightman of the United Kingdom did in March of 2011.

He managed a Guinness World Record-setting time of 2 hr 58 min 20 seconds at the Barcelona Marathon–the fastest time ever recorded for someone dressed up as a fruit.  There were others?  Wightman chose the banana shape because it was more stream-lined.  So, it wasn’t merely because he looked fab in yellow.

The “fastest marathon dressed as a vegetable” is held by a carrot.  No, really.

In Wightman’s defence, he did this for charity.

The following are random strangely-shaped produce.  I’m afraid that I wouldn’t be able to eat any of these.  Firstly, they’re freaky weird mutations.  And, secondly, some of them are just way too cute.  I don’t want to eat anything that’s cute.  That’s why I have a lot of turkey and crustaceans.  They have faces only their mothers could love. 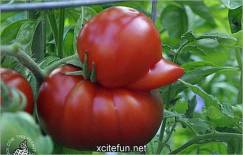