It’s one of those days where I seriously contemplate gender reassignment.  Let’s face it–having a uterus and a pair of ovaries can be a pain in the ass.  Especially when they render you a hemorrhagic, cramped-over, anemic mess every 21 days.  Thankfully, I don’t get bitchy.  Whiny, yes.  Bitchy, no.

Knowing my luck, a sex-change would transform me into this.  No offense, Nathan Lane.

I, therefore, apologize in advance for what will likely be a less-coherent than usual (and that’s saying something) post that may or may not contain a number of period-induced expletives.  For any of my faithful male readers who have not yet ran away from the computer screaming, I say, “thank you.”  If women must endure bleeding profusely from the crotch in order to ensure that the human race continues to thrive, the least the men can do is listen to us vent about it.  I bet you’re glad you’re not my hubby right now.  Hehe.

A few things have struck me as particularly strange this week.  First of all, the English language is a very peculiar thing–particularly if you only hear it spoken.  For instance, a naval graveyard can sound like a place where dead bellybuttons go.  Knotty pine sounds like very ill-behaved trees.  “She’s got a big pair,” could make someone think she has an over-sized fruit.  And who hasn’t partaken in the occasional “it’s not/it’s snot” joke?  Seriously.  ESL must be a nightmare.

Ack. A blanket that smells like a belly button.

Plus, what’s with the saying, “it sells like hotcakes?”  Do hotcakes really sell a lot?  In Canada, we call them pancakes, and they do not sell at all.  We don’t have IHOP, but we did have a few wannabes.  Golden Griddle?  Defunct.  Smitty’s Pancake House?  Gone with the wind.  Don’t get me wrong.  Canadians like pancakes.  We just don’t seem to like to pay for them.  I think we should coin our own phrase–“it sells like Tim Hortons‘ coffee.”  Even though I still say that Tim Hortons’ coffee smells like roadkill skunk.  But maybe I am just developing a giant nose tumour.

For the first time in my life, colour me speechless.

1)  I consider myself to be somewhat of a collector–PEZ, model cars, pop culture memorabilia–but some “collectors” really should keep their collections hidden away.  Australian librarian, Graham Barker, is one of those people.  For the past 26 years, he has mined his belly button for lint; eagerly retrieved his lode, and stored it in dated jars.

Why?  No seriously.  This is not a rhetorical question.

Admittedly, he has garnered himself a mention in the Guinness Book of World Records, achieving a moment of fame.  But do you want to go down in history as the man that not only spent 26 years of his life navel-gazing, but digging around in there too?

Having amassed 22.1 grams of belly button fibre, I must wonder if there is anything left of his sweaters?  And I don’t even want to know what sort of putrid odour wafts from these jars when he unscrews the lids?  Ack.  Just puked in my mouth again.  After 7 months of blogging, you think I’d get used to this.

Now, just for shits and giggles, check out the adoring and gleeful manner in which his eyes behold his beloved collection.  This is a man who clearly loves his belly button and the gifts it sprouts. 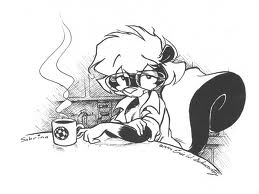 Holy crap. They smell the same to me. Am I dying?

2) It turns out I do not have an impaired olfactory lobe.  Nor do I have a nose tumour.  In fact, I may simply have a more finely tuned sniffer than the rest of you.

According to  David Rowe, smell-expert and author of Chemistry and Technology of Flavors and Fragrances, coffee and skunk juice do share an important aroma-causing compound.  Coffee contains furfuryl mercaptan, a chemical that is in the same family as butyl mercaptan–the chemical that gives a skunk squirt its musky (a.k.a. nauseating) smell.

This skunkiness is exacerbated during the creation of decaf.  Apparently the caffeine-removal process also removes much of this chemical, so companies must add it back in to make the product smell more enticing.  If they add too much, the result is a cup of java that reeks of skunk butt.

If you knew what it was, you probably wouldn’t hold it with your bare hands.

3)  So my quest to have Barry Weiss find my blog is still under way.  And I just happen to have a Barry-related tidbit that fits in with today’s rant.  Imagine that?

A while back, Storage Wars‘ (and all of television’s, for that matter), most lovable character came across an item that resembled a metal flask with a strange little door on the side.  He and his doting audience were enthralled.  Whatever could this strange device be?

Turns out it is a century-old, portable cuspidor–more commonly known as a spittoon.  Yes.  This is a vessel filled with the relics of old phlegm.  ACK!

While Barry initially appeared appalled by this revelation, he seemed to recover from this initial shock, pocketing the sputum-filled vessel and adding it to his personal collection.  I like to think he went home and boiled it first.

Ancient phlegm or not, he can still park his cuspidor under my Sealy Posturepedic any day of the week.

But he may want to wait for two to five days.

If you’d like to read more about Barry Weiss, his phlegm holder and more, check out my social media experiment at: Searching for Barry Weiss.