I’m not sure if it’s because I’m currently in the throes of an eye-leaking, nose-clogging, hack-until-I-barf cold or if it’s simply a symptom of having a very strange mind, but I had another oddball dream last night.  You’ve already heard of my tales of cookie-shopping with Betty White, riding roller coasters with an expletive-shouting Gordon Ramsay, and my favourite, a romantic interlude with Storage Wars‘ Barry Weiss in a strange setting–unless one usually has sex in a creek filled with miniature man-eating sharks.

Shucks, Barry. You got all dressed up for me? But aren’t you worried about the sharks making holes in your suit?

Last night’s slumber adventure did not involve anyone famous.  No, Barry did not stop by for another steamy encounter (even though he has an open invitation).

Apparently, Dream Me had been foisted into the position of Official Lasagna Baker for a large church function.  Ha!  Me in the kitchen!  That was their first mistake.  Their next lapse in judgement was expecting me to grind the beef–yes, make my own hamburger meat–in a massive contraption that, it would seem, I was supposed to know how to operate.  Dream Me is much brighter than Actual Me and managed to get the ground beef production under way, only to discover that there was nothing to stop the finished  product from falling on the floor.  Okay, Actual Me would have seen that one coming.

Dream Me soon found herself up to her knees in raw hamburger (definitely a few health code violations there, I’m sure) and went running into the kitchen for….wait for it…lasagna pans.  Yes, the answer to Dream Me’s problems was lasagna pans.  The kitchen helpers flew into action, searching for lasagna pans, but they all seemed to be encrusted with decades worth of former lasagnas.  “Wash them,” I ordered (Dream Me is much bossier than Actual Me).  Damn it all.  The taps turned but no water came out.  And somehow in the process of turning the tap, I spilled deep-fry fat on my arm (obviously to match Actual Me’s noodle water tummy burn…yes, I said noodle water tummy burn.  Say it ten times fast).  Apparently, my trusty kitchen aids had been deep-frying the lasagna noodles.

Needless to say, I woke up around this point.  Maybe out of sheer frustration.  But, probably to avoid cleaning up the mountain of meat followed by a painful wound debriding session. 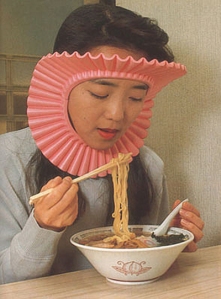 After all, what woman hasn’t had the embarrassing experience of leaving the house with a noodle in her hair?

1) Speaking of noodles, here’s something…um…interesting.  I love Japan.  Home of the square watermelon, remote control toilet, sleeping commuter plunger helmet, girlfriend pillow, and so much more.  I have unearthed yet another fabulous Japanese invention.

While North Americans suffer from toilet paper shoe or skirt-tucked-up-the-buttcrack syndrome, our Far East counterparts appear to fall victim to another fashion faux pas–the dreaded condition known as “noodle in the hair.”  Apparently, pasta-riddled locks are such  a prevalent problem that they have developed a noodle eater’s hair guard.

All I can tell you is that I have long curly hair and eating fusilli is a bitch. 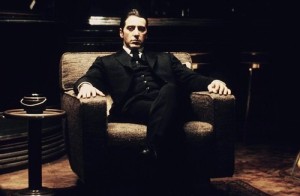 Yummier than any pasta dish.

2) I should have been born Italian.  I love pasta.  And I am quite adept at doing the whole fork and spoon noodle rolling thing.  I eat spaghetti like a Corleone.  And I’d like to get my hands on Michael.

Everybody Loves Raymond‘s Marie Barone has a giant fork and spoon on her kitchen wall.  I have often wondered why anyone would need or want a giant fork or spoon.  I have finally figured it out.

According to the folks at the Guinness World Records, the world’s longest noodle was created in 2007 in Japan by Hiroshi Kuroda.  This impressive piece of noodle art was just over 1800 feet long.  That’s over a third of a mile.  Holy crap!

3)  So what if Frank & Marie have a penchant for huge cutlery?  There are worse things they could do.  Like use their huge spoon to fling huge foods.

When I was in college studying Fashion, our entire dorm floor used to regularly engage in wet noodle fights.  Seriously.  There is nothing more revolting than being thwacked in the face with a handful of slimy spaghetti.  Well, I guess there is one thing that was more revolting–the stalactite-like noodles hanging from the ceiling the next morning.

I guess you could dress us up, but you couldn’t take us anywhere.

It turns out that we were not the only ones guilty of waging war with edible weapons.  Meet the spring-loaded spoon.  A real product available to real people.  For just $4.95, you can become the master of your kitchen table.  I so want one of these.  Check it out at:  http://www.coolstuffexpress.com/store/p/439-Zing-The-Spring-Loaded-Spoon-Food-Launcher.html

Here’s a few shots of people who take “playing with their food” a tad bit too far. 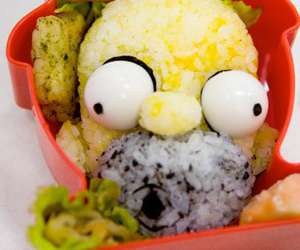 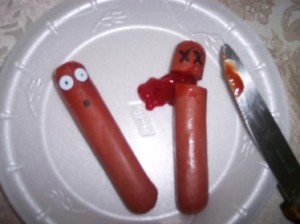