I am constantly being ignored.  No, this is not merely an attention-craving rant by a narcissistic “what about me?” Generation X-er.  I am a member of Generation X.  And I do crave attention.  But neither one of these facts has anything to do with this.

I was always the kid in school who would put up her hand and never get called on.  Unless it was during math class.  I always got called on in math Class.  I think the teacher secretly enjoyed my blank, clueless expression and stammering.  But all my other teachers seemed oblivious to my very existence.

Even as a grown-up, my presence is often over-looked.  Particularly in line-ups.  The other day, I was next in line at the deli and the server asked the woman behind me what she wanted.  After years of this sort of thing happening, I have grown bolder and simply said to the woman behind me, “I guess I am invisible.”  Cheeky, eh?  The server looked astonished that I had called her out on her blatant disregard for my paltry synthetic smoked poultry needs.  “Oh, were you waiting to be served?” She asked.  Seriously, did she think that I was standing in line because I was short of better things to do?

This “ignore that red-head girl” attitude is not only foisted upon me by my fellow humans, but machines tend to ignore me too.  Especially automatic doors.  They refuse to open for me.  I could do Richard Simmons-styled arm flailing followed by a dash of Elaine Benes‘ awkward kick-dancing and still, the doors won’t budge.

That would look like this    with a touch of this added

Not exactly something that is easy to ignore, is it?

At first, I attributed my failure to be noticed to my extreme lack of height.  It’s easy to overlook someone that is a foot shorter than you.  I ignore kids all the time.  Oops.  Did I say that?

But then, another thought occurred to me.  What if I’m not being ignored?  Maybe I’m invisible.  Or worse.  What if I am simply a figment of my own imagination and I do not exist at all?  Note to self:  Stop filing income tax.  I bet that will get me noticed. 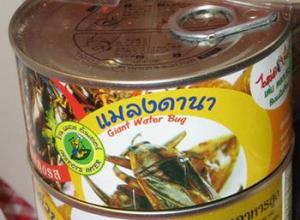 1)  Sometimes being ignored at the deli counter is not a bad thing.  What the heck is mock chicken anyway?  Something else pretending to be a chicken?  And, I’m sorry, but baloney is just a flattened hot dog.  And we all know that hot dogs consist of a slurry of leftover animals parts.  And what’s with meat/macaroni loaf?  We know the meat isn’t meat, but is the noodle noodle?

I suppose it could be worse.  If I ever walked in to the Walmart canned meat section and found a can of water bugs–not just the ordinary ones either, but the GIANT ones–I would drop my groceries and flee the store emitting a scream so shrill that it would put Richard Simmons to shame.  I know.  Quit picking on the poor man.

Well, apparently our friends in Thailand do not possess this North American squeamishness.  Canned tuna is for wimps.  Cloverleaf salmon for the faint at heart.  If you want a hearty meal, whip up a water beetle salad sandwich.

Okay, that time I really did throw up in my mouth. 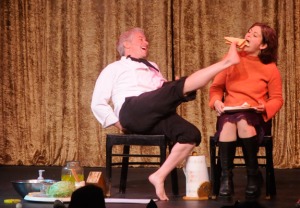 2)  There may be some things worse than a bug salad sandwich, albeit not many.  One would be a sandwich lovingly prepared by someone’s feet.

Yes, that’s exactly how comedian Rob Williams of Austin, TX likes his lunches.  Foot made.  Gross?  Very.  But his nimble toes have earned him the Guinness World Record for the fastest sandwich made with one’s feet.

He whipped up a culinary masterpiece stuffed with baloney (he had to remove the rind), cheese (his toes managed to rip off the plastic wrapper),  tomato, mustard, mayo, pickles and lettuce , complete with olives on sticks, in a mere 1 minute and 57 seconds.  This included slicing the sandwich in half with his toes.  That’s some fancy footwork. 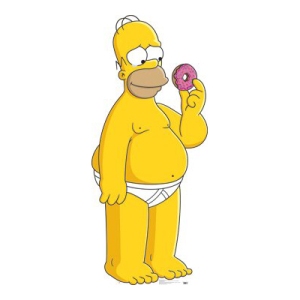 Homer Simpson only has four toes.  He could never make sandwiches with his feet. 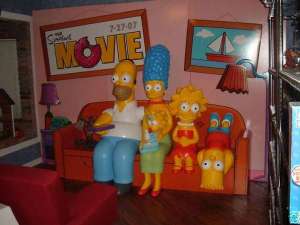 3)  I’ve always maintained that TV can be highly educational.  Unfortunately, I gravitate to more low-brow fare; therefore, my nightly education is limited to…well…this–the stuff you see in my blog.

Last night’s episode of Shipping Wars proved very enlightening.  To me.  One of the shipments turned out to be a 400 pound replica of the Simpson’s clan sitting in their trademark pose on the family couch.  According to the seller, only 86 of these movie theatre props were released to the public.

As much as I love it, I seriously could never justify dedicating a prime sofa location to fibreglass people–no matter how cute they are.  Plus, they look like a bugger to dust. 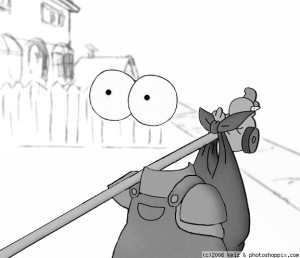