I recently decided I wanted to buy a hamster.  Yes, I realize this is an unusual pet choice for a grown-up.  In my defence, I have allergies, so my selection is limited.  And hamsters are low maintenance–perfect for a scatterbrained individual like myself.

So, I headed off to Walmart and picked out a cage that looks like something the Jetsons would live in, some light blue shavings (yup, they come in techno-colour now), and some food.  I turned around with my heavily-laden arms (I was too stupid to get a cart beforehand), only to have a little old lady exclaim, “Oh!  You must have children.  I remember those days.”  Part of me wanted to make her feel like an idiot by saying, “Nope.  This is for me.”  But, then, I realized she may not feel like an idiot at all.  She might just think that I’m the idiot.  An adult with a hamster.  I simply smiled and said, “yes.”  Yes, I know.  I lied.  But it was a neat and tidy lie.  No flowers.  I didn’t feel compelled to give my fictitious children names (Molly and Clive would have come to mind.  I don’t know why) or ages (what age is “hamster appropriate?”).  I didn’t embellish and add a tragic tale of woe about a flattened beagle and the family car.  I managed to keep my deception to a single syllable.  This, in itself, is noteworthy.

My hamster is now home.  I have decided it is a “he.”  Apparently, “sexing” a hamster is tricky, so one really never knows.  I had originally named him “Clive” (there’s that name again) because he looks rather formal–for a relative of a rat.  He has white hands.  Like he’s wearing gloves.  But that name was not received with great applause.  He is now officially “Humphrey.”  I don’t know why.

Which, for some reason, brings me to something that I have been wondering about.  Did Noah have to wait for snails and slugs to make their way on to the ark?  Did he invite them first, so that he could get other things done while they were travelling?  Or did he wave his hands in frustration and pick them up?  Which makes me wonder how many “slower” animals didn’t make it on time.

And, how did Noah “sex” the hamsters to make sure he, indeed, had one of each gender?  And wouldn’t the ark have become overrun with the little buggers?  And rabbits.  And why on earth did he invite the mosquito?

1)  I admit that I do like escargot–at least I think I do.  Maybe it’s just the garlic butter that I enjoy.  Let’s face it–everything tastes good smothered in melted golden butter with garlic thrown in.  I have never actually had a snail without it.  Maybe they taste like dirt.  Or erasers.  Or worse, dirt-covered erasers.

Apparently, someone thinks they taste pretty good.  They have, in fact, become a key ingredient in one of the world’s most expensive dishes–a “curry” that goes for a whopping $3600 US.

London’s Bombay Brassiere has taken opulence (and quite possibly, indigestion) to a whole new level.  What their menu calls “The Samundari Khazana Curry” consists of Devon crab, white truffle, sea snails (told you–star of the show), Scottish lobster, and caviar.  But wait–I forgot the proverbial “icing on the cake”–this time in the form of gold.  Really.  The lobster has been iced with edible gold leaf.  Even a lowly cherry tomato has been coated with the stuff.  ACK.  Sure, gold is pretty.  As a ring.  A necklace.  Or in it’s natural shape–a long, rectangular bar.  But it doesn’t belong in my lower intestine.  That’s just wrong.

I guess it’s like laying a golden egg.  Only messier. 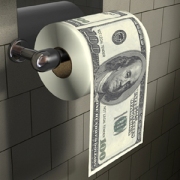 2)  If you poop gold, ordinary toilet paper simply will not do.  It is likely that you prefer to use $100 bills.  But, if you find yourself short on cash (likely because you just indulged at the Bombay Brassiere), you may wish to opt for the faux c-note instead.  Justtoiletpaper.com (yes, there is a store for everything these days) will sell you a roll for $8.95.

I wonder how Benjamin Franklin feels about this.

If currency is not your style, there are many other fashionable rolls on which to wipe your tender toosh.  I thought it would be fun (not to mention unconventional) to hold a favourite toilet paper poll right here. 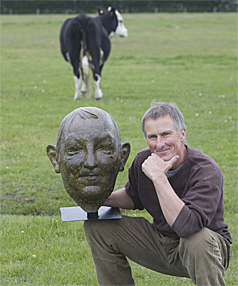 3)  So, maybe you don’t poop gold.  It doesn’t mean that your bowels are incapable of creating a masterpiece of their very own.  Just ask artist, Sam Mahon.  He has turned cow patties into a bust that sold for thousands.

The subject of his piece, New Zealand Environment Minister, Nick Smith likely wasn’t thrilled with his “sh*tty” likeness.  Mahon created the piece to protest against what he claimed was Smith’s failure to protect waterways from dairy farm pollution.  Apparently, the piece  doesn’t smell at all.

But kiddies, I wouldn’t recommend trying this at home.