“For my birthday I got a humidifier and a de-humidifier… I put them in the same room and let them fight it out.”  Steven Wright.

Two days until the start of Fall a.k.a. Autumn.  I wonder why it has two names.  Actually, I really wonder how the name “fall” came about.  Is it because the leaves “fall?”  What if you live in a country where leaves don’t fall?  What if your surrounded by pines, or palms, or rubber trees?  By the way, rubber trees sound cool.  Trees made of rubber.  I wonder if they bend like Gumby.

In winter, the snow “falls,” so why didn’t we call it fall?  Why doesn’t summer have the alias “swelter?”  Spring could be called “smells like poop.”  I like that.  People would ask, “Where are you going for Smells Like Poop Break?”

I am currently suffering through a summer cold–soon to become a Fall cold.  My head is a throbbing cesspool of snot.  My ears can no longer do what they are paid to do–hear.  They seem to have decided to try aching instead.  Even my tongue hurts.  Who the hell gets a sore tongue?

On the upside, my husband is enjoying the quiet.  But I am going crazy.  I must yammer.  Thank God for blogs.  And a captive audience.  Assuming you’re still there.  (Insert sound of crickets).

And I’ve never actually seen a rubber tree.  If you cut one down, I’m sure the logs don’t bounce.  But I like to imagine they do.  For some reason, this reminds me of a Seinfeld bit… 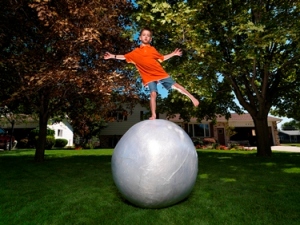 1)  Speaking of bouncing, here is a ball that doesn’t bounce.  It’s made of cling wrap.  It clings.

According to the Guinness World Records people, this is the world’s largest ball made of cling wrap.  There have been others?  And this sucker weighs over 281 pounds.  The last time I looked, Saran Wrap wasn’t cheap, making this one valuable ball.  Not that anyone would want to use any of this cellophane now.  He’s put his feet on it.  And I think I see dog droppings in the lawn.

2)  Rubber Trees remind me of the Osmond’s and their brief TV Show, The Osmond Family Show.  Marie sang the song “High Hopes” about the rubber tree plant on that show. I was never a fan of Donnie & Marie, if I’m completely honest.  I just remember that Donnie wore purple socks.  The whole family had very nice teeth.  I bet if they all smiled at once, the blinding, white light could be seen from space.  And they were all horribly sweet and nice.  They made the Brady Bunch look like the Manson Family.  My favourite Brady was the dog, “Tiger,” which is a cat’s name–a fact that confused me immensely as a child.  And, apparently, also as an adult.  That sentence consisted of nothing but words that start with “a.”  Cool. 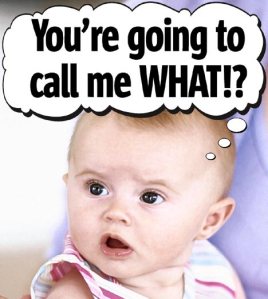 3)  So, while Marie Osmond was singing about an ant and a rubber tree plant, what were Americans naming their children?  According to the Social Security Administration, 1979’s top names were:

Now, I must go blow my nose.